How old is Castle Carraig na Curragh? Who built it?

Castle Carraig na Curragh is a stone fortification in the pass between Cork and the Lee Valley. This much is sure. From there the speculation begins on the age and ownership. But this is not unusual for structures this old, as they were the pinnacle of military technology at the time and were constantly being refined year after year, generation after generation.

To calculate the date of a structure there are a few historic sources to examine. Maps are a great source. Carraig na Curragh, with various spellings, appears on maps as far back as 1777, plus various British Army ordinance maps from around the same era. So no help there. Interestingly,the various attempts at spelling the sound of the spoken Irish language on these maps can lead to difficulty in actually determining the meaning of the name. It has been translated as “Rock”, the term for stone fortification, “of the Wier” or “of the Rapids” with both translations being a solid argument. There was an eel weir at the site, and there are rapids. 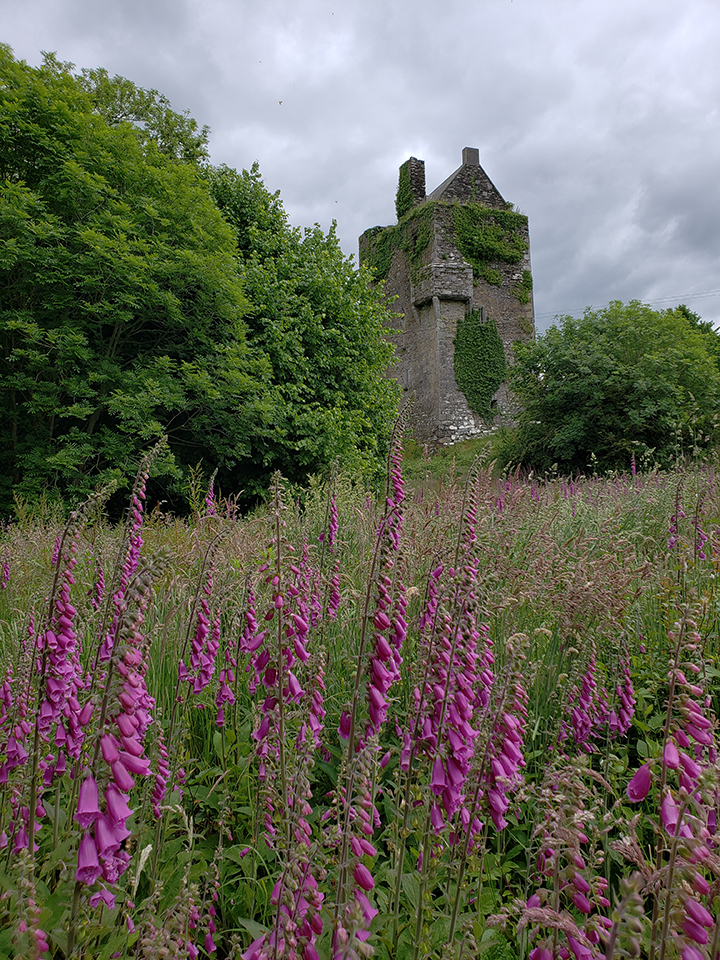 Another written source for dating a structure is mention in historic records. In this case, again one can trace the history of the site back to the siege by Donal O’Sullivan Beare, or the other events surrounding Irish rebellions in the 16th and 17th centuries.

There is a fantastic “Game of Thrones” story from the 1500’s in documented history about the O’Donovan Clan Chieftain being killed by his brother. His widow and young son flee to Carraig na Curragh and live there under assumed names under the protection of Clan O’Leary until the boy comes of age. He marries a girl from the castle, Helena O’Leary, and the O’Leary Chieftain and his men, travel with the now young man to go reclaim his kingship as the rightful heir. The young man then builds Castle O’Donovan. But alas, none of these mentions in history go far enough back. But certainly it was in existence for the O’Donovan story.

What the Archaeology Says 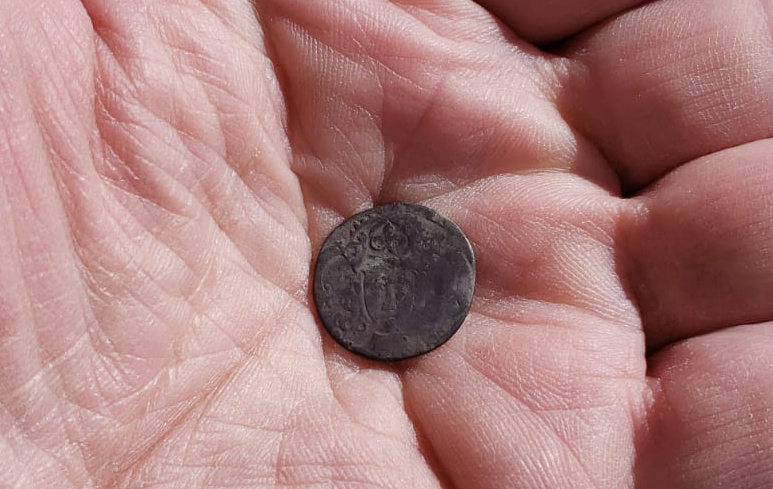 What about archaeological evidence? So far, direct archaeological evidence from the castle itself can be dated to the 1470’s based on an Edward IV coin found under a layer of rendering at the base of the tower. However, is this from the original construction? Both maps and recorded history show us that the village, which is now known as Inchigeelagh, was located around the tower, to the west and to the south. Inchigeelagh was later forced to move to its current location upriver. Artifacts from these areas go back to Neolithic times, so not a lot of help there. Stone and bronze artifacts as well as early English coins only demonstrate continuous occupation of the area, not the date of construction. 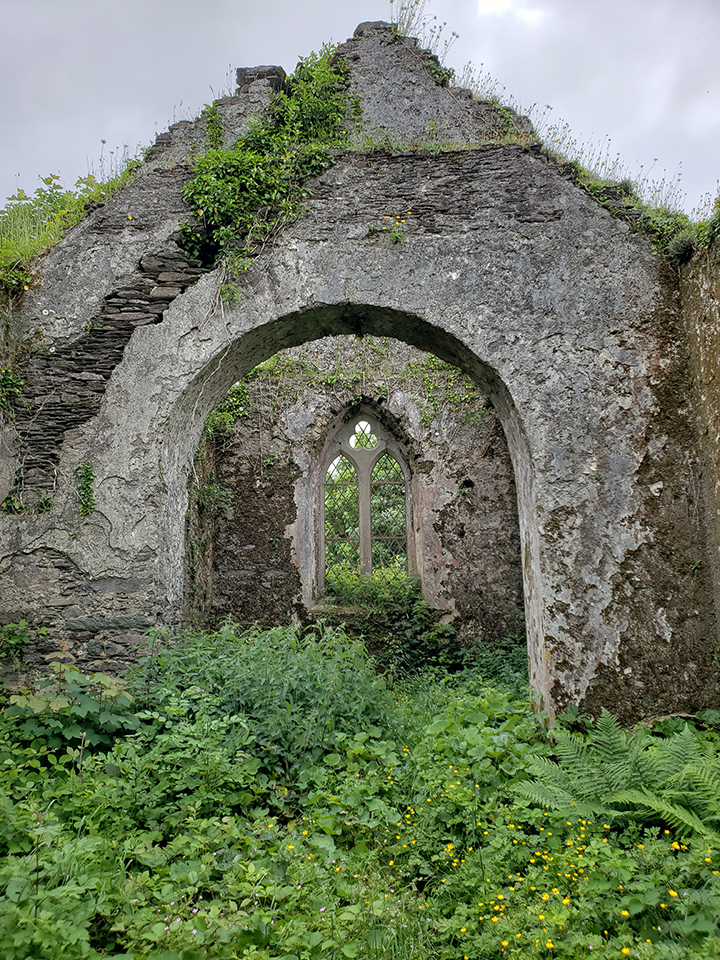 The associated church might offer some clues. The existing church site is a ruin of a 19th century Church of Ireland structure. However, it is built on top of a previous Catholic church, which itself may have been the site of a previous independent early Christian, Irish patriarchal church. The Catholic church appears on the inventory of the Vatican in the 1400’s. The O’Leary Clan Chieftain given credit for building Carraig na Curragh is buried at the southeast corner of this church. And thus, the 15th century argument gains some support. 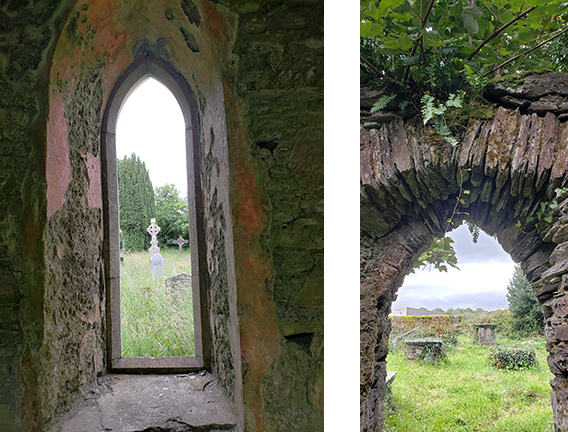 What Does Carraig na Curragh Say About itself?

The first most obvious thing is the site. A promontory of bedrock rises up at the crossing of two main arteries for ancient travel, the Lee River and the old Macroom to Dunmanway road in the pass between Cork and the Lee Valley. Add to that the fact that it is exactly one day's march from Cork City. This is important because during the days of constant invasion, it was typical to place a small garrison one day's march in several different directions from the point one actually wanted to protect.

This means that, if there were a small lookout post at this site, a messenger could ride to Cork to warn of the approach of an enemy on foot with one day for preparation. Even into the 19th century the British continued to use this area for such a garrison as indicated by the British Barracks which was located a short distance from Carraig na Curragh. One day’s march is a significant measure of distance. 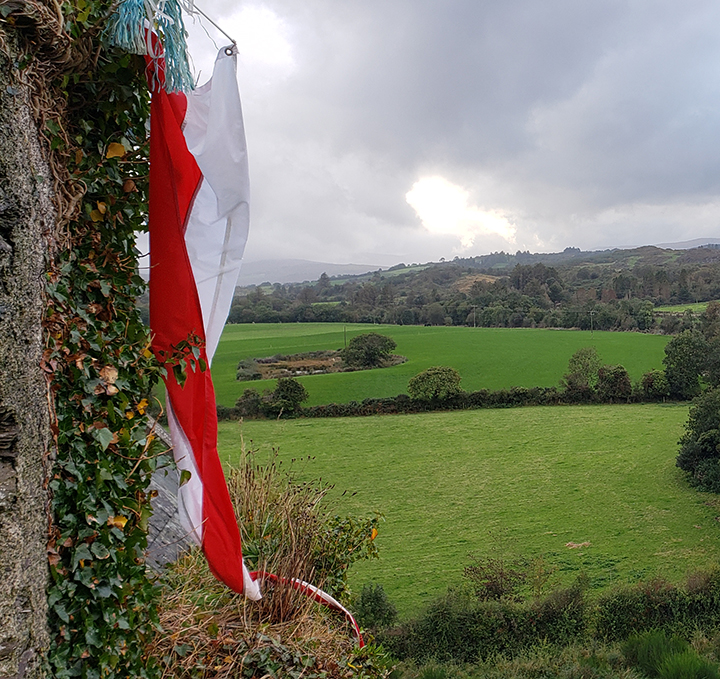 The structure itself is clearly built in two main phases, with several other added features. The main tower changes about two-thirds of the way up with a clear change in craftsmanship and finish. This is not only obvious to the eye from the outside, but inside there is a room which was abandoned and enclosed in order to build the bartizan on the northwest corner. Thus the bartizan sits atop this abandoned room. There is another window on the south side which has no corresponding opening on the inside, and as well there seems to be a large void in the east wall. It is possible that there is a passage through the south wall similar to the one in the north wall. The redan on the southeast corner is also another possible later add on. At the top of the circular staircase there is another major revision with an obvious alteration to the door arch and a complete change to the spiral staircase.

As for datable features, the vaulted ceiling may offer some help. These ceilings were built using a technique whereby a gigantic basket was woven in the shape of the vault, mortar was placed on top, along with layers of stone and more mortar and more stone. Ultimately, the basket weave would come down leaving mortar with a basket weave impression.

Occasionally, one can still find pieces of the sticks used for making the basket and these can be dated in a lab. That has been done recently on another structure and the date obtained was pushed back into the late 1400’s. However, that only gives the date of the construction of the vaulted ceiling. Was a preexisting structure rebuilt at that time? 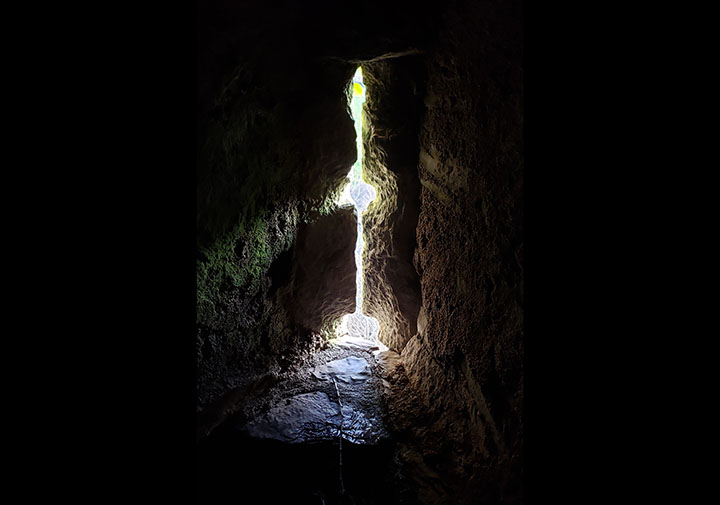 Some of the obvious features are easily dated such as the gun loops. As weapons changed, so did the defensive structures. Slit windows were created with the firing of arrows and crossbow bolts and thus are called arrow loops. Later construction altered these slightly to provide for the firing of early muskets through the slits. However, an arrow loop can be modified into a gun loop, especially if there is a major revision to the structure taking place.

The floor design is also a source of answers, but alas, also more questions. Floor design went through a major change in the 11th to 12th centuries. Originally, stone walls would be built up to the level of a desired floor. Then heavy beams would be laid into the stonework and the structure would rise in this manner. These sockets supported the beams, until the beams would need to be changed out, such as after a fire or after some deterioration of the beam. Then the sockets became problematic. Along came the corbel, a stone support turned perpendicular to the wall. Then, a beam would be laid using the corbel for support rather than the wall itself.

This could help to date the structure, except that Carraig na Curragh appears to have both. In the east and west walls, at each floor level, are sockets, along with corbels on the north and south walls.

Throw into this mix the existence of indoor fireplaces, three indicated. The style of fireplaces, more specifically the chimneys, are characteristic of the 15th century. However, once again there is another observation to make. The chimneys, much like the vault itself, are run inside the main walls, not incorporated in them. Thus, a major remodel could account for the 15th century chimneys.

The third floor, fourth by American reckoning, has additional information, and puzzles. There seems to be crenellation built into the walls, most clearly visible at the west end. The end shows Phase One finish in a large, crenellated pattern, with the large windows to the south and north following this pattern. If that is the case, that would make this floor the former top of a previous structure.

Also on this floor is a void in the floor that leads down to the presumed room at the east end of the floor below. Other Tower Houses have been seen with this feature. One speculation is that this is a cistern fed by rainwater from the former top of the Phase One structure. Given the size and presumed refilling of this possible cistern it would have given the garrison at least a one month supply of water, if that is indeed the purpose of this feature.

Recently discovered outside the structure are tower foundations around the base of the Tower House, or castle keep. A large, square foundation carved into the bedrock has been discovered just to the west of the northwest corner of the keep. Then, north of the northwest corner another tower base was discovered. Then, moving equidistance towards the east, a possible third and a definite fourth tower base was discovered to the east of the northeast corner. Irish Tower Houses will typically have a bawn wall inside which the livestock were kept at night. However, to have so many towers so close together suggests something more defensive than a bawn. And if there was a palisade or wall between these apparent towers, that makes the site more of a military outpost than a Clan Chieftains home. It is possible that the suggested defensive wall predates the Irish Tower House configuration of the Phase Two construction. 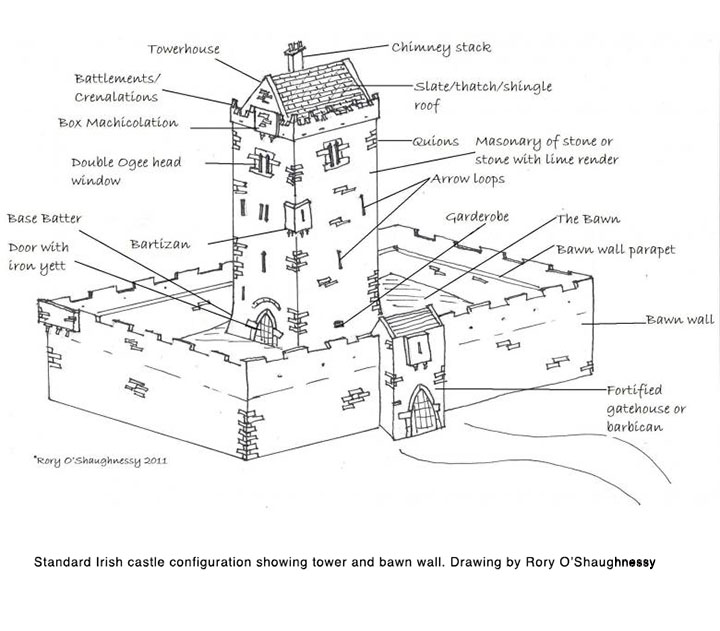 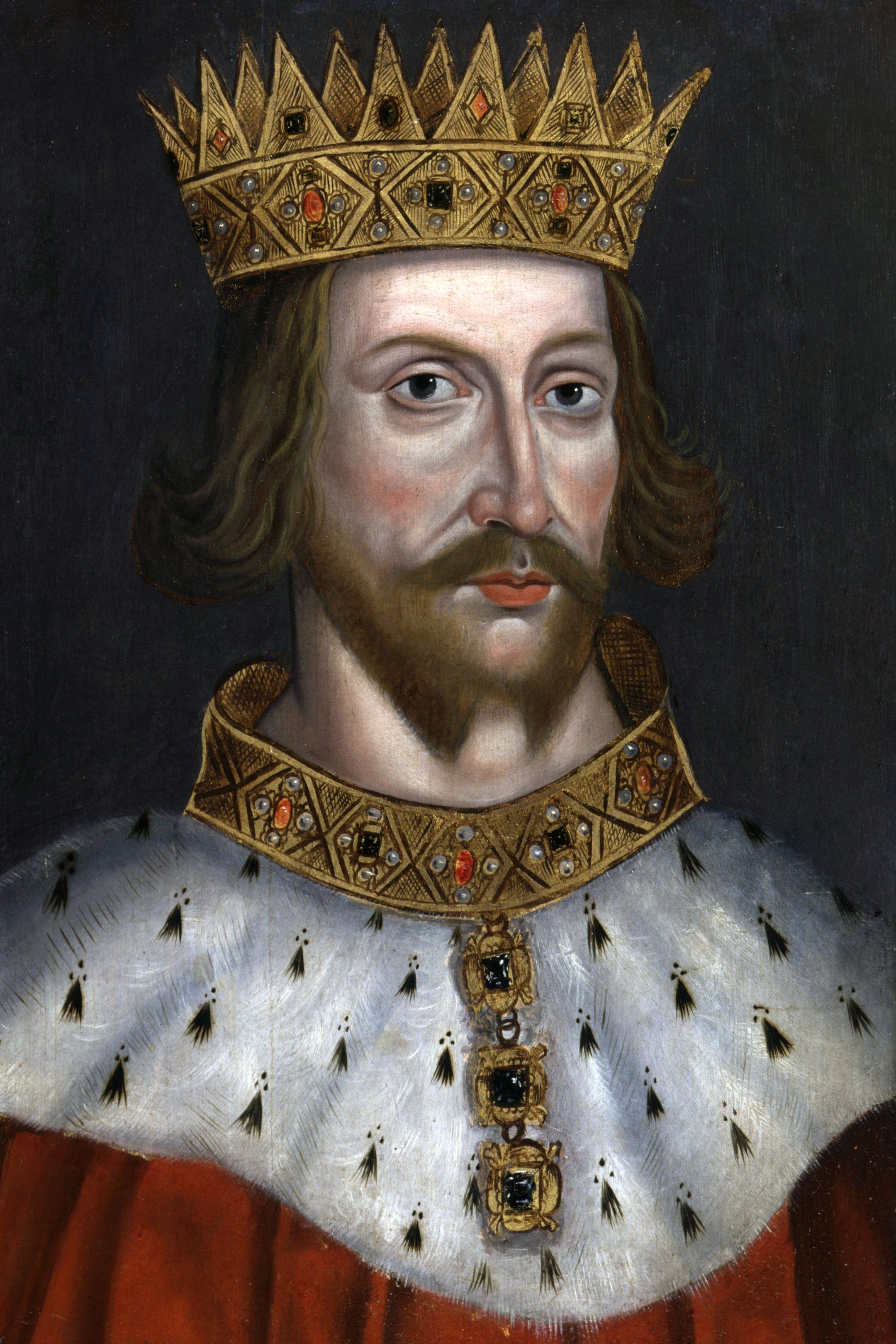 It is possible that the answer can be found in a major event that occurred relatively nearby. That event is the arrival of none other than Henry II who, after landing at Waterford and traveling to Dublin, occupied Cork City for a year beginning in 1171 and ending in 1172 when he set sail from Wexford. Henry II claimed for himself the city of Cork plus the immediately surrounding townlands. The next ring of townlands he gave to his Norman Lords.

The site of Carraig na Curragh would have been perfect as a protective barrier for the King of England, not only providing the requisite one day’s notice, but also controlling the intersection of a major road and waterway. As a small, unnamed, perimeter garrison, if Carraig na Curragh were part of the defenses of Cork, it would not be necessarily listed.

In 1210 King John confiscated and reissued the lands around Cork, to the same people, thus making them beholden to him.

And so, there you have it.

How old is Carraig na Curragh? Some say a 500 years old. Others say a thousand years old, give or take

The last standing O'Leary Castle, Carraig na Curragh will be available for weddings starting in Summer 2022